I took part today in a group demo at the local society. I had a swamp cypress that I'd not styled this season in anticipation of the demo and had fed it up and let it run to a degree.

The tree is close to 20 years old and had different levels of attention over the years. I grew it from a slip of a cutting and built in some early movement which now shows a good result.There was a time when I realised the structure above the first two branches was irredeemable and so cut it off expecting new shoots to come and replace it. Well surprisingly that didn't happen and so after a couple more years the first two branches massed up really well and I decided to graft on a new leader.

More time passed and I kept looking at the scarecrow structure with those branches sticking out at right angles. Sometimes it takes a little while for the ideas to crystalise. Perhaps the new leader needed to develop more before the direction was compelling. 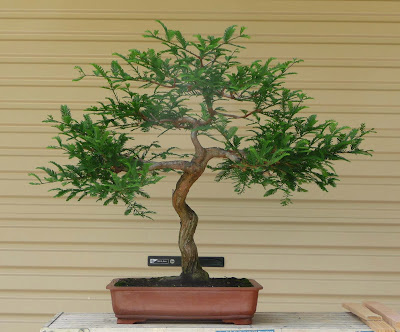 But the right time has arrived and that lead to the demo today. The plan was to use a little heavy engineering to get those two main branches down and then bring the rest of the tree to follow. The tree was also too far inclined to the front and I wanted to take it closer to the upright position. The front of the pot had to be inclined about 75mm to get to that position. As you can see I raffia wrapped a number of areas which were at greatest risk, although the risk of breakage with a swampy is probably lower than most.

It all worked out to plan. The tilt to the left brings the apex into the right alignment and gives the lower trunk a little inclination from the vertical which is good. When repotted to the new angle it will be a totally transformed tree, ready for the next 10 years.
The development plan from here includes bulking up the trunk above the first two branches and with a little more height, a rounded canopy. I'll be looking for rear facing budding to develop into sacrafice branches at about the 4th branch level. 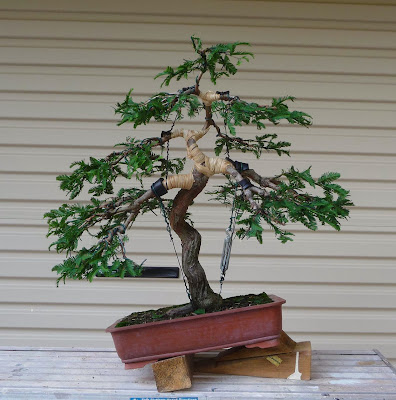 For the sake of a little photoshopping let's see what it would look like repotted. It shows how influential the potting angle can be and how visually pleasing it can be to get that apex over the nebari. 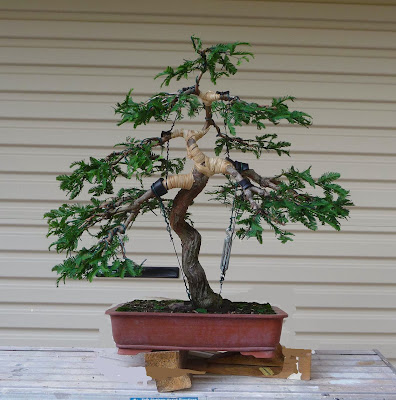