The following shots are of one of the trees I've root pruned today, a large root over rock Ficus Benjamina 'Baby Ben'. 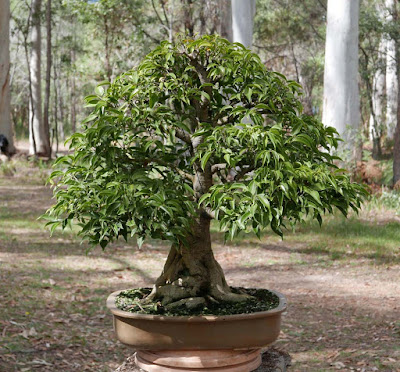 This is before starting. Over the cooler months it has been quite static but new shoots are just starting to emerge at the ends of the branches. All those leaves keep pumping water however and it has become increasingly difficult to keep the water up to it and overcome the tree's capacity to dry out its potting medium. Once dry in the center it is almost impossible to wet again without soaking the tree and that's too difficult with the size of it. I can't imagine it going two years without root pruning. 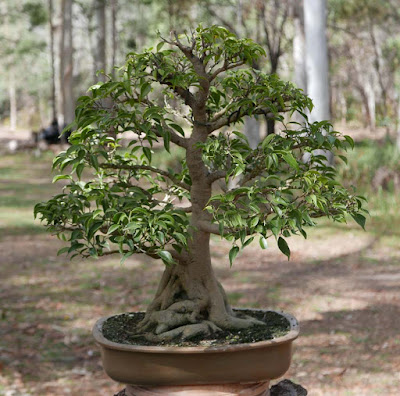 First task is to reduce the leaf load so that there is a balance between the impaired root capacity after pruning and the tree's capacity to discharge water. This is also done to give it a preparatory pruning for the coming growing season, to bring in the reach of the branches and foliage. 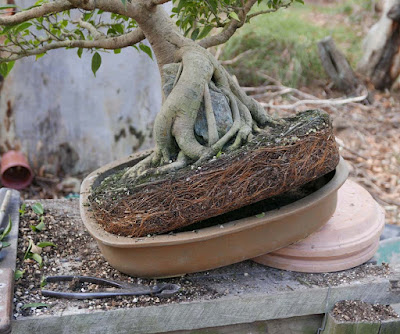 That done the attention turns to the roots. As expected there is a tight mass of roots to resolve. 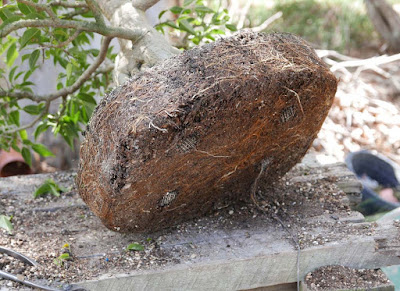 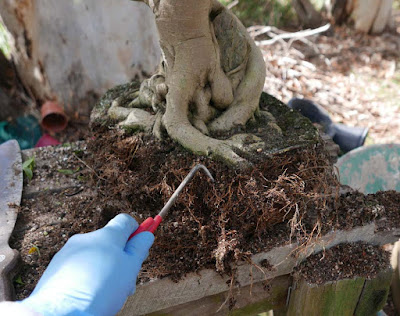 I begin by using the root hook to tease out the walls all around the edge, in towards the surface roots, at the same time removing any new ones running over the surface. 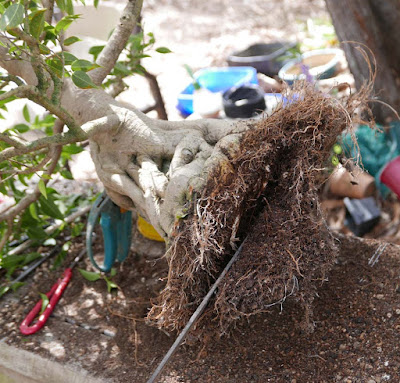 Then a slice off the bottom, taking about half the root depth. Ficus roots are not easy to cut but the machete does the job very well. 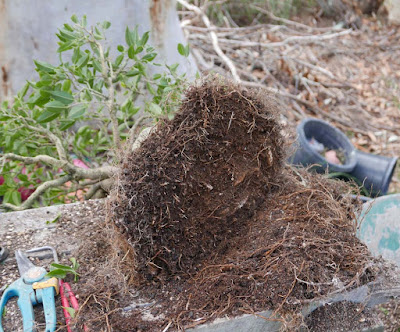 This is followed up by tidying up any roots running sideways. You can see that it is quite dry under here. 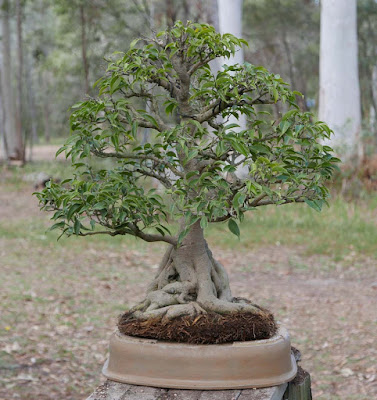 Here you can see the final root mass left after pruning. 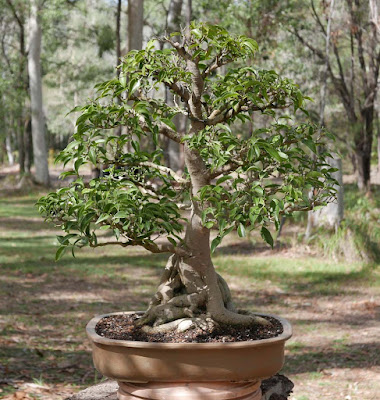 And finally re-potted and ready for the season to come. The new medium will allow water to get to where it is needed and even with less roots the tree will be far better off.
Posted by Stephen Cullum at 17:26 No comments:

Three years ago I harvested a number of mature Celtis from a local site. Most had big lumpy bases and in the just past growing season I put air layers in place to make the final separation from those bases. This is the largest of those trees.
The photo series was taken on the root-pruning afternoon session of the Foundations Development program in the local club. This was the last of 8 afternoon sessions for a group of 17 participants. 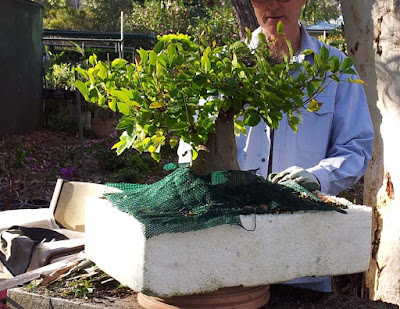 By mid way through August after such a mild winter and no leaf drop it was time to prepare for spring. This is how the tree looked before the work started. The shade cloth on the surface is to keep the potting medium around the layer site. 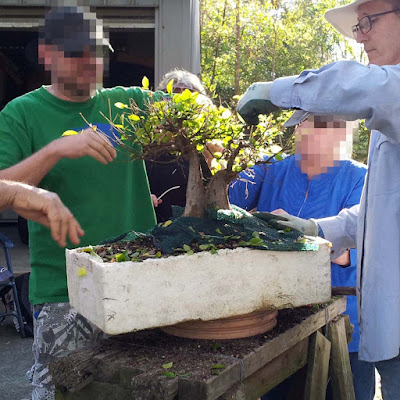 First task was a defoliation to rationalize the branch structure and get it set for spring. The poly box was about the only thing that would hold the base when I collected it. 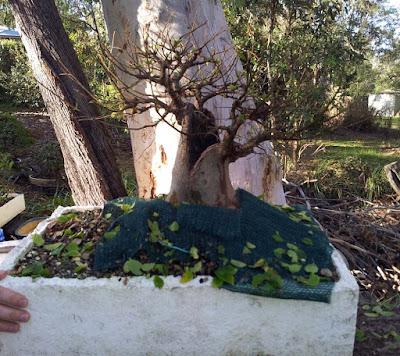 This is the view from the rear. 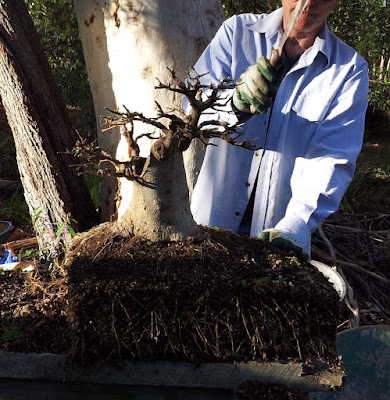 This is the front view after branch pruning. It has been cut back hard to promote good close new branch development. Here the root mass is being reduced by machete with cuts all around the sides and across the bottom. Under the trunk is a piece of old trunk material like a wooden shoe box. 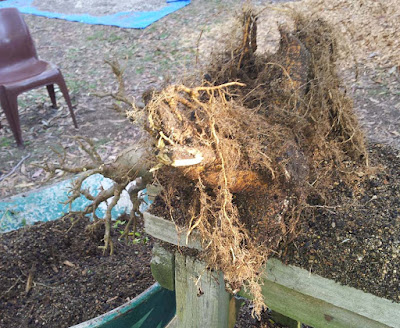 This is the tree upended after removing all the medium and a lot of roots. The upper structure of the tree is hanging over the bench to the left. This is just to get int in position to cut off the old now redundant base. 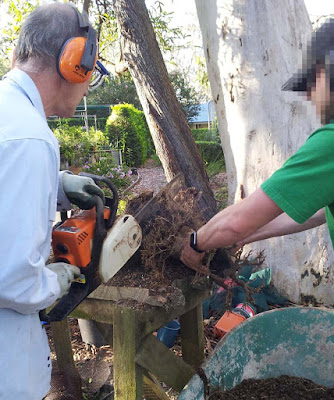 A chain saw is used to cut just under the new set of roots that have been produced at the layer site. 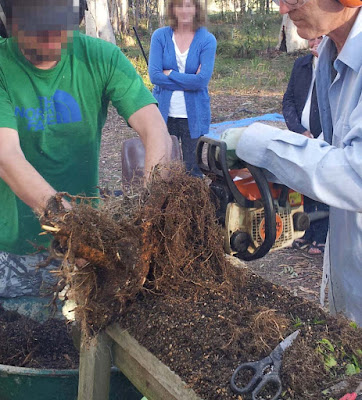 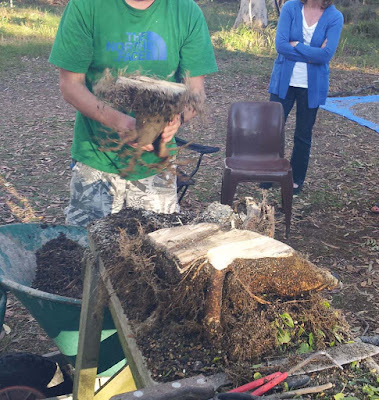 Separation! The tree is being held upside down for inspection and the old base on the bench. That was quite a cut. 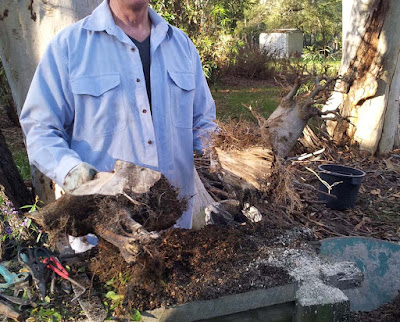 Here are both parts again. In this shot you can see the annular fan of new roots around the base of the trunk. There are not many roots there but quite enough for the tree to get started and knowing the species it will not hesitate to run quickly. 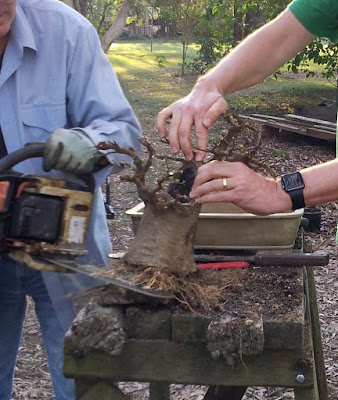 It just needed one final adjustment. 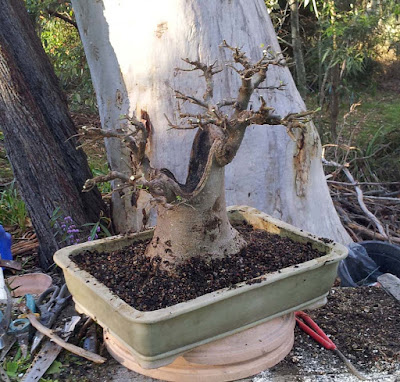 Finally potted up for the next season. 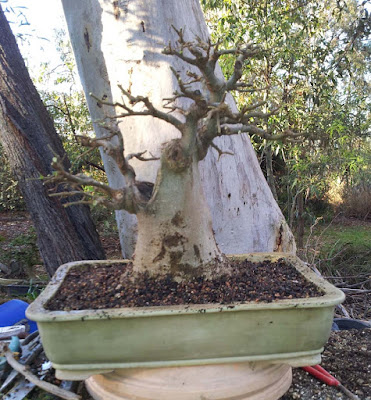 Not such a good picture from the front but there will be more in time. The tree will shortly spring into life and the pot will be full of roots by this time next year. Thanks Mal for the photos.

Posted by Stephen Cullum at 22:25 No comments:

The photos in this post were taken on the 31st of July. The weather has been so balmy and there is definitely a hint of spring in the air. New shoots are everywhere in the garden where the ground doesn't see the overnight temperatures so much. The time for root pruning has been coming back by about a week a year. Not long ago the start date was the 31st of August, then the 15th and now this year here I am making a start in July.
I usually start with my deciduous trees but I wanted to get this Japanese Box done so here it is. 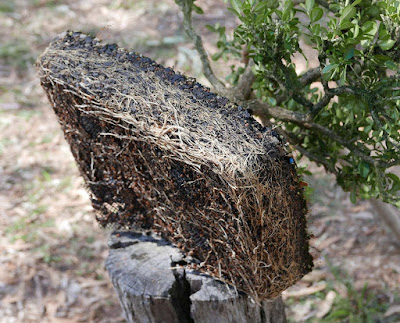 Straight out of the pot the root mass is as expected and there is evidence of fresh growth, a good sign for timing. The root mass holding its shape like this is a good indicator of healthy root conditions and growth over the last year. It is interesting to note too that the mass of roots around the lower part of the pot have been living almost hydroponically, demonstrating the value and necessity of regular fertilization. 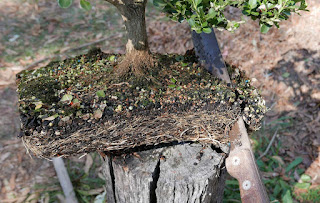 Knowing this the tree's roots will be made up exclusively of fibrous roots I make a start with cuts around all the sides. 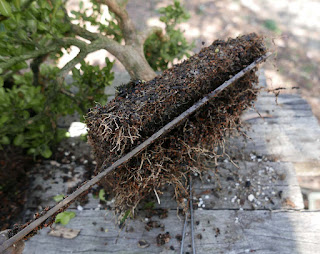 This is followed up with a slice off the bottom. I'm using the blade of the machete as a knife here rather than chopping. For this tree the thickness of the root mass was reduced to about one third of the original depth. 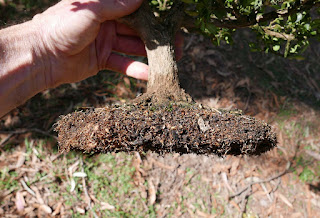 More trimming around the edges brings it back to a relatively small 'cake' of roots, to perhaps 10% to 15% of the original volume. There is nothing to be gained by raking these out or water washing as I do for the deciduous trees. 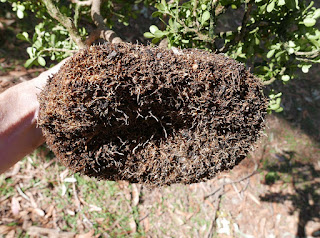 Cutting away directly under the trunk is helpful to ensure new roots come mostly from those around the periphery of the nebari, getting it set for the next growth season. Back in the pot and its ready to go again.

Posted by Stephen Cullum at 10:27 No comments: