My old kiln has been great since I installed the automatic controls; predictable and effective. So when I loaded it up with commission pots to finish off a glaze firing I expected more of the same but the kiln only managed to get to 1000 C and no further. Or apparently that was the problem. I returned as I do every now and then to see where it was up to in the firing schedule only to be unhappily greeted by an ERR message on the controller screen. That certainly didn’t give me a warm feeling. 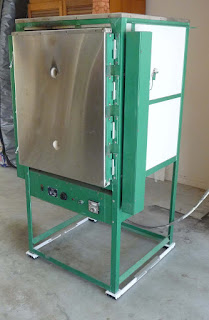 
So what could have gone wrong, did I mess up the schedule on starting, did the controller fail, was it a thermocouple problem???? AHHHHHH!!!!!


Trouble shooting revealed the problem to be a blown element, one out of three in the kiln. That was just phase one, the easiest, of the trouble shooting. The real trouble is how to find a replacement. I bought the kiln second-hand and the manufacturer retired and ceased years before I bought it. I didn’t have any spec on the coils.


That’s ok I said to myself there are plenty of helpful folks in the pottery business who will know what to do next, or so I thought, over optimistically. I was eventually confronted with lots of 'no idea, don't know what to do' or 'we don't do that' or I don't know anyone who can help'.

When you need an element you quickly realize that there is a big group of variables in the mix, kiln rating, power supply, design parameters of the wire used etc etc and it requires a patient supplier to entertain assisting when the brief is sketchy. As with most things ceramic, I have found that the best answer is to get informed, so I turned naturally to my best backstop, the internet. 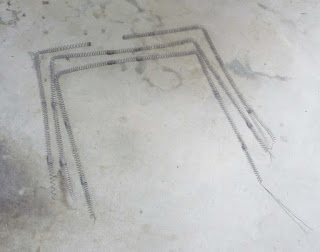 This is the failed element coil, out and on the floor.
It has three passes around the side and back walls. 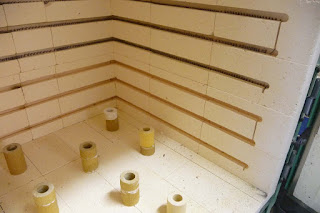 What I did know was that the kiln was rated for 1280 C, 10800 watts and 240v, three phase power. I could also take some physical measurement of the element as is.
My reading soon raised the question of the variable of wiring pattern How the elements are wired up to use the three phases is critical to the load they take and there are different approaches applied by different designs and suppliers, as you would expect. I lifted the lid after switching off three switches which are installed at the power board, on the cable connect and at the controller, so figured I was safe to peak.


This was  my sketch of the wiring of the elements

It turns out the elements are wired in a “WYE” arrangement, vs the alternative "DELTA". The Wye applies our line standard 240 volts to each element. Knowledge advances.

Each element comprises an effective linear length or wire coiled up, determined by some simple maths. The closer the coils the more turns, the more wire, the higher the resistance. The element design is driven by the resistance it must offer.

Each element is equally loaded, each consuming one third of the power; each element seeing 240 volts and delivering 3600 watts of heat. A search for ‘electrical power equations’ revealed those few simple relationships between power, voltage, resistance and current as well as a few  automated calculation engines where you just plug in what you know and the engine runs the numbers, sweet. Having power and voltage is all you need to find out current and resistance for each coil; which turn out to be 15 amps and 16 ohm. This is getting close to a spec and I’m starting to feel like I can solve it.

The resistance has to be the key to designing an element to deliver the (heat) power needed. The element is just a piece of wire coiled up. Thinner wire and a longer length will increase resistance. My old elements were wound into a helix 13.5mm diameter to sit in the housing groove and it looked like the wire diameter was about 1.8mm; getting there. One supplier was kind enough to list on line element wire diameters and resistance per meter of length. Another calculation engine I found worked out the maths of a helical coil giving wire length for coil length and diameter. Coil length was something determined by the kiln size which I could also measure from the old element.


Using 1.8mm wire I needed 28 meters of it to get to 16 ohms resistance, a simple calculation. Using my helical calculator I found that 28 meters of wire would comfortably be wound into a helix to fit in the available coil space. Problem solved!! I’m starting to feel like I could design a kiln from scratch.


Now that it is clearer to me what I need it will be easier to guide a supplier who may be more interested. I hope this might help anyone else out there with an old kiln and element failure. The answer really is quite elementary.

Posted by Stephen Cullum at 10:01 No comments: