I've selected the glaze recipes I want to use on the next batch of pots from the shortlist of Post 14 and have been preparing. The mixtures are all mixed and ready to use. Today's job was final pot preparation. That involved running over them with sandpaper to smooth any rough spots and take the sharp edges off the top flange profile.
To keep the glaze away from where you don't want it to go the most usual method you see is to use a wax resist material which then burns off in the glaze firing. This is most suited to dip glazing. With the size of these pots, around 430 to 450mm, dipping would demand glaze in industrial quantities and would preclude running more than a couple of recipes at once. So I'm still brush applying the glaze and while the process has some wrinkles it will do for now. I would really like to get to spray application but that demands another package of infrastructure. 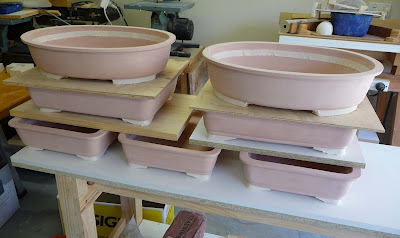 So that's a long way of getting to the preparation step of masking. As you can see from the picture I am using ordinary old masking tape from the hardware shop. It works fine and I just peel it off before firing. I like to run the glaze over to the inside surface at the top and so the ring of tape on the inside is to give a neat edge on the inside. While it is possible to carefully edge (paint) glaze around the feet it's just as easy to mask them too so there is no cleanup to do, and you get a good clean edge.
I can only fit four pots at a time in the kiln so a couple of firings are coming up, but first I've got some glazing to do.
Posted by Stephen Cullum at 16:43 No comments:

It's cooling down here in Australia right now, well relatively speaking.
In Brisbane an overnight temperature of 10C and max of 22C is a very cold day, and it's not winter yet. Believe me, the trees certainly know. They know it's autumn and time to turn and drop those leaves.

Here's a little group planting of Chinese Elms in autumn foliage. Sorry about the pot - would you believe it's a plastic one. Nice shape regardless, but not long now before I have a real pot for the planting. 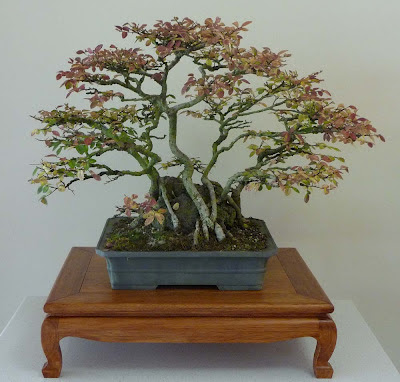 Posted by Stephen Cullum at 17:55 No comments:

Rest assured I have been working hard on resolving the issue of glaze formulations. With a number of base glazes I wanted to test or retest as well as variations within both the basic recipe and colourants the number of individual mixes I had to make up came to 95. Now on the average each recipe might have 6 or 7 components, each needing to be separately and precisely weighed, so there were a couple of days straight just making the dry mixes.

Unfortunately its still not over at that point. Some of the components, particularly the clays, don't suspend easily in water and so every blend has to be pushed through a fine screen to get good mixing and acceptable suspension of the components.

I also used some brushing medium this time too - a commercial liquid product - which I added at a rate of about one quarter of the added liquid. It certainly seemed to make a big difference in getting a smooth and even surface with three or four coats of glaze applied by brush. Either that or I'm just climbing the learning curve, but I'll certainly use it again.

The other interesting discovery has been the value of texture in the surface of the clay. I formed the test pieces by rolling under a piece of canvas and so the surface while flat was not smooth. It was a pretty tight canvas weave and so the texture was still pretty 'fine'. This meant that the finite differences in depth of the glaze on the surface that result from brushing was compounded by the canvas texture. The net result was a level of fine mottling which gives interest and visual appeal to the surface. This is definitely something I'm going to try to replicate on pots in the future.

In this series of tests I also tried a few overlays - one glaze brushed over the top of another. This was a bit of a blind activity not having any tangible confirmation at the time of what the basic glazes would look like. I did get one that produced a result in the target zone. More work to be done on this opportunity.

The following pictures are of the top selections of the individual glaze recipes which I will now use for bonsai pots. It's good to be able to go to that next step now with a higher level of confidence in the outcome. The other really useful outcome is that I now have a number of base glazes which reliable give me a matte/satin finish and that I can now work with to further develop colouration variations.
Thes are all brush applied, 4 coats and then oxidation fired to 1240C. 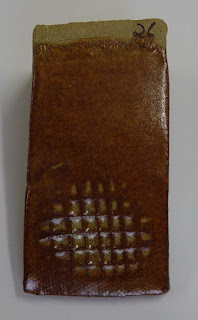 Number 26 is a nice satin red/brown. 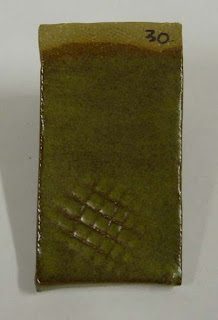 This one, number 30, has 50% Nephyline Syenite which is more suited to the 1240 firing temperature than something like Custer Feldspar. Good olive green satin. 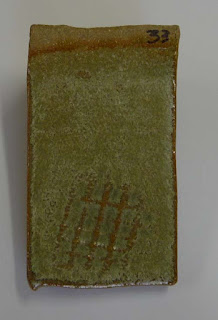 The base for this glaze is from one called Val's Satin Black. Thanks Val. I've reduced the Si/Al ratio to go further down the spectrum and have got good surface and colour variagation. 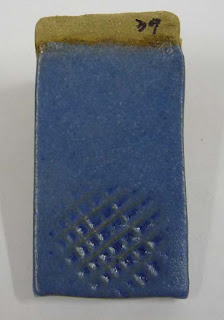 Number 39 uses the same base as John Post's Tomato Red glaze, also a Nephylene Syenite glaze. This has produced a good matte/satin blue with 0.5% Cu carb and 1% Co carb. 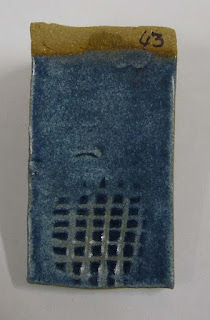 Number 43 is also based on a John Post formulation - this one his high calcium matte formulation, again Nephyline Syenite. This one shows most clearly the impact of the underlying 'canvas' surface texture. I ran a series if these using the same base which has just 3% Titanium Oxide for added opacifier. I'm going to run some again and make them a little more opaque and up the colourant addition to make them a little stronger, most have turned out very pastel toned. 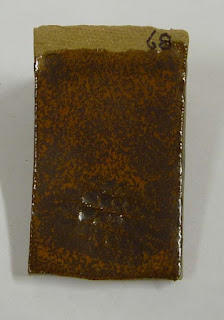 This one, number 68 is based on Sankey's Iron Red glaze with added 8% Zinc Oxide. This is a custer glaze base. 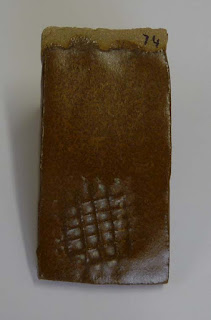 I found a straight Butterscotch recipe which I ran with Kaolin as a substitute for Ball Clay to cut the silica and it produced a very nice satin butterscotch yellow. Number 74 uses the same base and otherwise 2% Manganese carbonate for the brown. 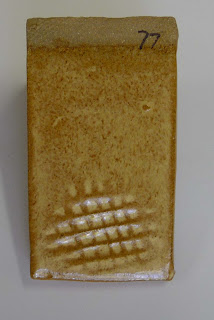 Number 77 is derived from a classic Nutmeg Shino recipe and shows a good mottle. I like it even if the surface is a touch glossier than I'd aimed for. 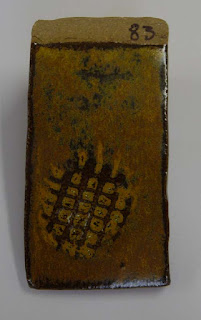 This one is a classic Tenmoku formula, tweaked to give a satin finish. Clearly with some underlying surface texture the surface colour variations are very interesting. 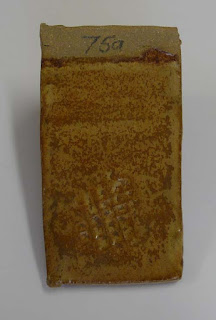 And this last one is a layered glaze. As testament to the unpredictability of this technique the underlying glaze is an iron rich shino overlayed with a reasonably fluid, fairly transparent blue /green glaze. It has a great mottled surface which doesn't have much to do with the stoneware surface.

Posted by Stephen Cullum at 18:38 No comments:

Just as I got the blog up and running I went off on a little trip for a few weeks and have been feeling like I've broken the first rule of blogging, not having posted anything for weeks.

A little European cultural immersion however has been inspirational on a number of levels. And just for fun, to that end here is a wonderful 17th C Italian majolica plate from the Sevres Ceramics Museum in Paris, a beautiful piece. 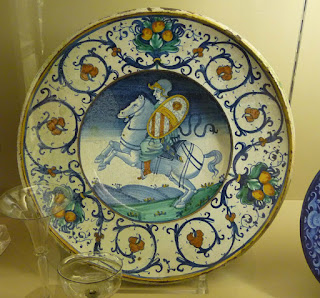 I'm a bit of a gardener as well as a pottery enthusiast, or as the front door mat says, ' a normal person and a gardener live here'. One of my plant interests, yes there are others!, is the hybridisation of Echinacea - the North American native species and much used garden perennial. To cut a long story short there are a number of species, of Pink, White and Yellow flowers. Interbreeding and persistence can yield other colours. Here's one that came out while I was away - a nice pastel. 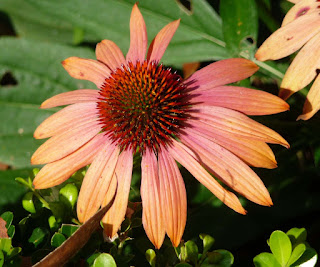 But yes back to Bonsai pots. The kiln has been loaded up and ready to go for 5 weeks and so today it was fired up - another 3 pots and about 100 test tiles. I need to run another series of glaze tests to get some more useful results that work the way I want in my kiln with the materials readily available here; hence the test tiles. The next series will be run asap. 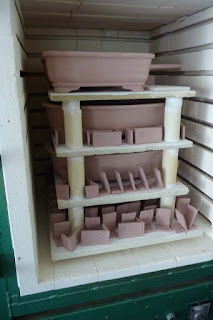 Here it is ready to go before flicking the switch this morning. The other work front is ongoing pot design improvement. I've devised a different foot design for the rectangular pots and the following picture shows the foot pattern form shaped up in plasticine ready to make the plaster casts. The pattern feet have a few imperfections, if you look closely, but it will be easier to resolve these in the moulds after casting. 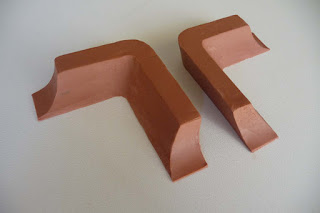 To make the plaster cast it is simply a matter of building a dam around the pattern feet and pouring in the plaster of paris. This job will get done soon so they can be used on the next pots made.

This is the  style I'm aiming to move to - one with an apparently slightly exaggerated foot to pot height ratio. Watch this space.

This firing will give me a total of 7 pots in bisque so I'm really looking forward to getting the next glaze trials done to make a selection and take the 7 through to their glaze firing.


Posted by Stephen Cullum at 19:39 No comments:

Back again after a little trip away, being inspired.

From the glaze trials in Post 9 there are a couple of glazes that have been questioned and so here are the recipes. All were fired to 1240C 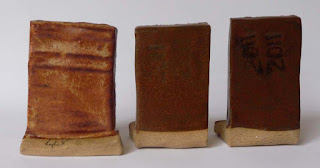 Red 48 on the left of this series, is supposed to be a Nutmeg Shino. Surface finish is shiny without being overly glossy. 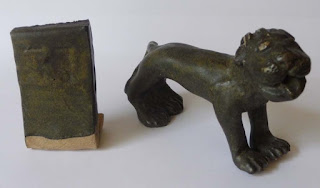 The little lion in Cast Iron Black, with a good satin matte finish.

The Middle Blue 12 in the blue series, very middle blue in colour and with a glossy finish.

And number 16 which has run is Cover Blue which would be ideal for layered glazing. Gloss finish.