Here are a couple of Natalensis that I've been developing with sacrificial branches. Its time to take the sacrifice off one off and root prune both.

This first one is one of three that I've been growing for about 3 years. You can see some pictures of them all in an earlier post (232) here.
They all started as small cuttings and I allowed a vertical sacrificial branch to develop on each. The idea was to develop a small tree with a large trunk in the shortest time.Here you can see the small tree developing close to the pot and then the scale of the sacrifice branch. 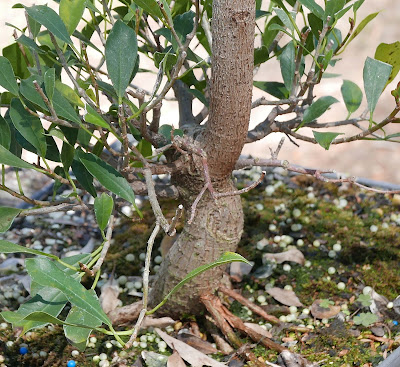 Here is the point of union, at the 'back' of the future small tree. 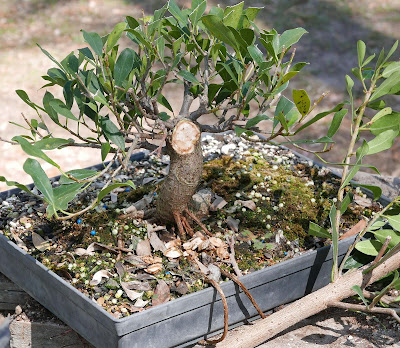 Here it is removed. 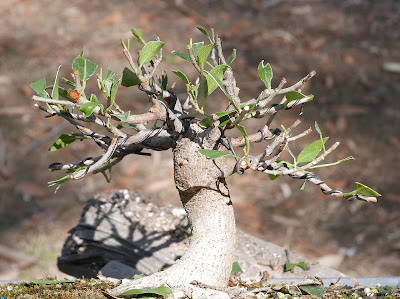 From the front before starting the root work I did a little branch work and defoliation to reduce the dehydration risk. The style will be classic ficus architecture, certainly not an informal upright with dominant single tapering trunk. 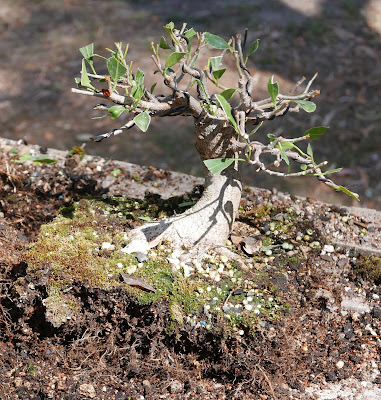 The first cut in reducing the roots. 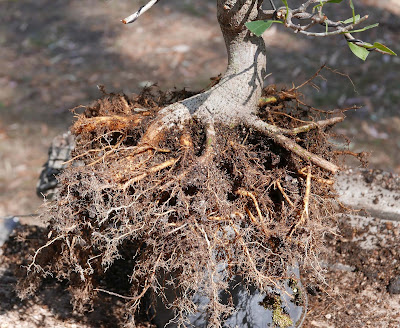 After a thorough root raking to see what was what. 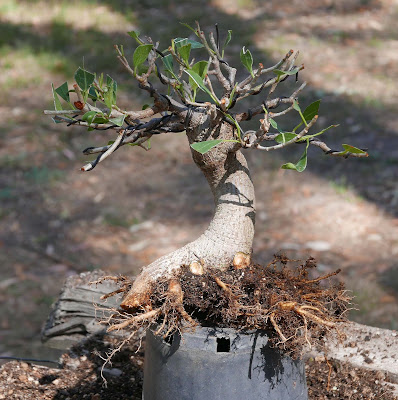 Cut back to rearrange and refine the roots for the next stage of growth. It had a really large root from the left which had to be removed. These things are tough and will have no problem with this amount of roots remaining. 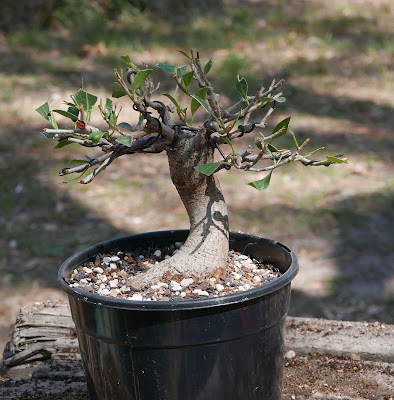 Re-potted and ready to go again. Still too soon for a bonsai pot. Perhaps in another 12 months. 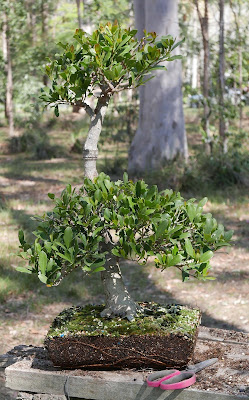 The second one is a tree featured in 'Bonsai Foundations'. It is a five year old Natalensis with a heavy sacrificial branch that I plan to keep for the time being. I use this tree in teaching and demonstration and so although the branch really should come off I'll leave it there with a minimum of foliage. 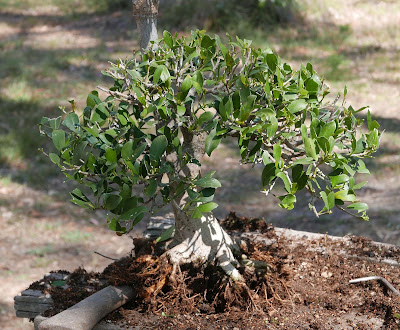 Here it is root pruned back and foliage clipped to minimize dehydration. 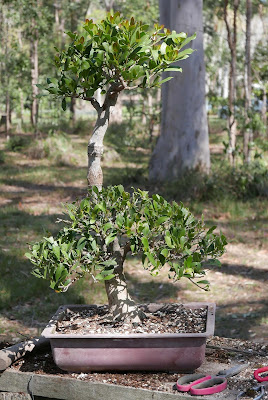 And then back in the same oversized pot for another year. 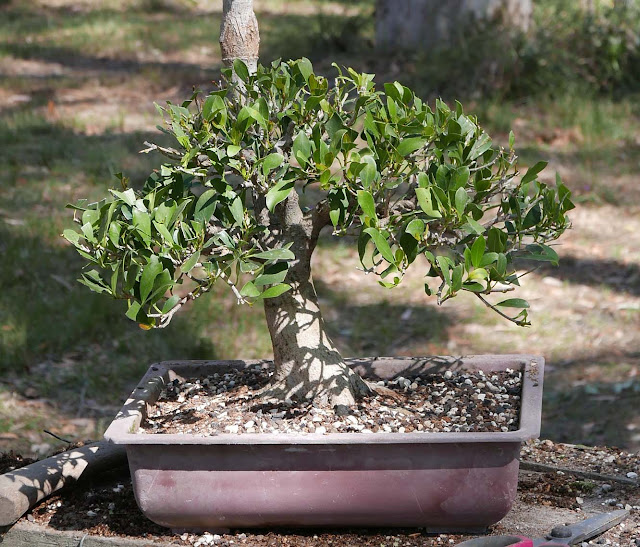 Posted by Stephen Cullum at 17:26 No comments:

Spring is here in Brisbane even though the nights are still getting down to 12ish, C. That means on the bonsai calendar that  its root pruning season. I started about mid August with all the deciduous trees, then my natives and now its the turn of the ficus.
Here are a couple of other trees I did in some of the earlier work. 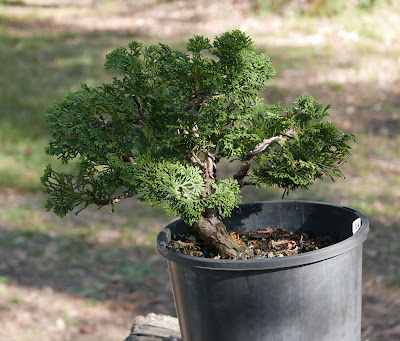 First up is a dwarf Hinoki that I acquired this year. Its been in a garden pot and I wanted to replace its growing media and set it at a different angle, both good reasons for a repot. 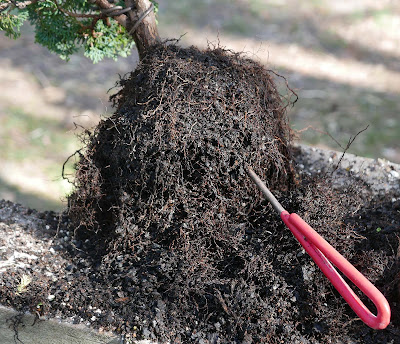 Once out of the pot the highly organic material can be seen. It has grown pretty well in this material with good dispersed root penetration. But none the less my plan is for a much more granular open mix to replace it. 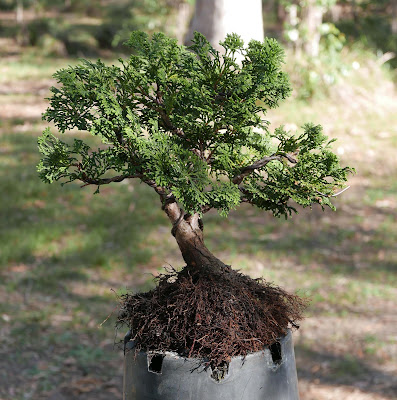 This is about as much as I want to take off it this time. 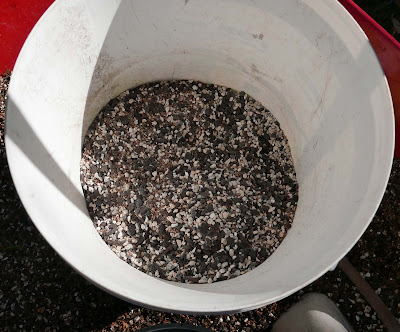 This is the replacement mix, one third diatomite, one third zeolite and one third mini bark (pre-composted). 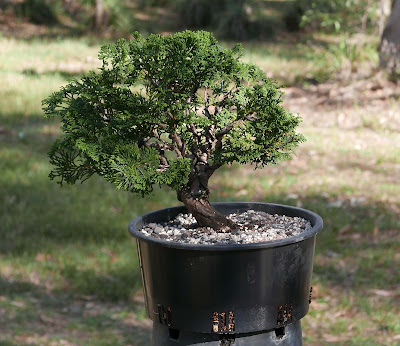 Repotted and ready to go for the coming season. 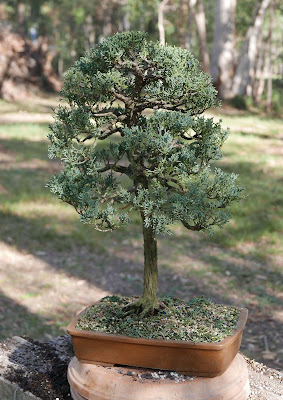 Next up is another conifer; this one a blaauw juniper. Its been in this shallow pot for the year in my standard four part mix. 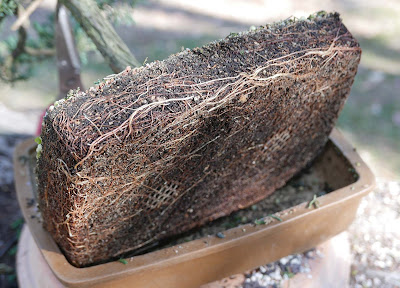 Nice healthy root growth and fully penetrated throughout the mix. At this time of year I find it increasingly difficult to get moisture into the pots. With lots of root growth throughout the medium the spaces for water penetration are blocked up. As a result the trees produce a lot of fine feeder roots in the top 20 to 25mm of the pot further impeding flow. So the top 25 to 30mm gets wet when watering but not much gets further down. Another really good reason for root pruning and repotting. 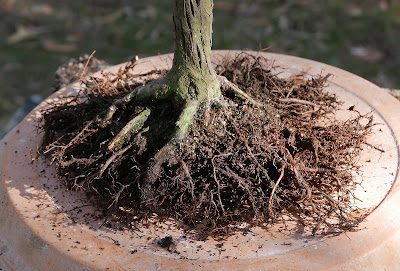 Pruned back and ready to go again. 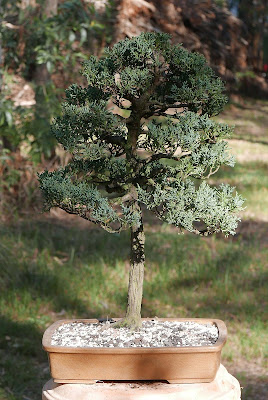 Back into the same pot in the three part open mix. 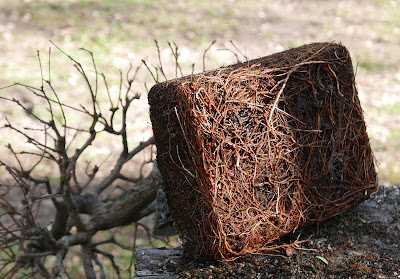 This is an upended Swamp Cypress.It grew all summer in a shallow pan of water and was starting to push the tree up out of the pot. When you see the roots in the base you can see why. This is a tree that I'm planning a radical cutback and restyle starting with a reversal of viewing position so I'll set the tree back in the pot with this in mind. 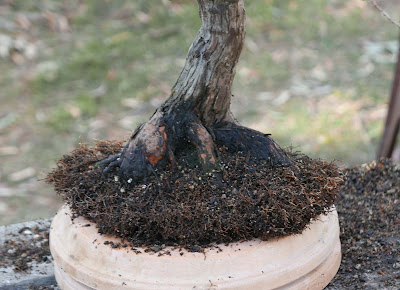 From all that mass of roots back to this, a small tight block of fine feeders. Past experience says that the tree will relish this cutback and launch itself into the new season with a burst of growth.

Posted by Stephen Cullum at 15:17 No comments: