I've got back into doing a little clay work recently. For a while I've been wanting to make a new 'rock' pot as well as to use some decorative stamps on the walls of my pots to give a little surface texture.
Gary Jackson has been the king of stamps in the blog-sphere so I've unashamedly done the art world thing and uplifted a few ideas.

First up the rock-pot. Here it is just finished and about 530mm long 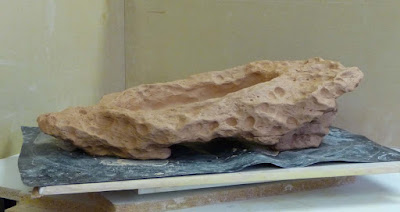 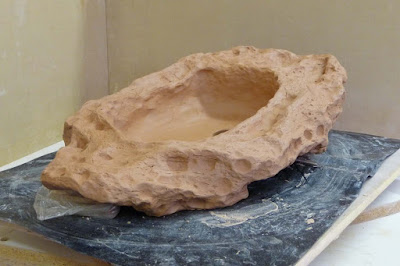 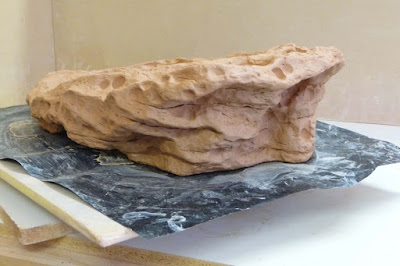 The high end is built up to conceal the generous bowl to contain the tree(s). 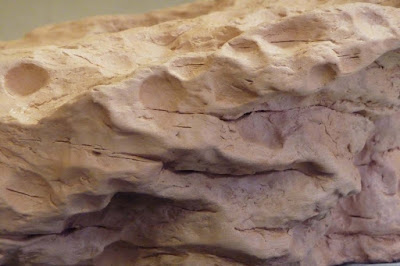 This shows a little of the detail at that end. Like all pots the wet clay colour brings out the detail nicely. I'm intending to paint/colour the pot with underglaze colouring after bisque firing. I have a number of native Leptospermums which I want to plant as a group in the pot.

Back in 2013 I made three that were more slab-like and coloured them using underglaze too. Post 131 and Post 133.

This is a selection of stamps I made - just to see what would happen. Thanks Gary. These are just dried and not yet fired. They will be ready to go after a bisque firing.

And then a few pots, a series of small ovals of two different sizes: 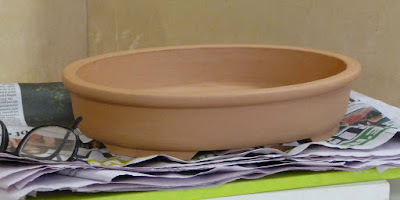 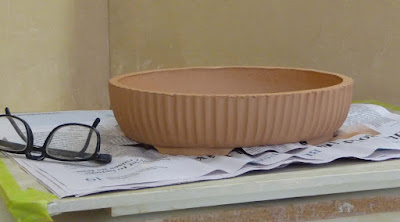 This one has fluted sides which I made just with a piece of impressed 10mm dowel. The shape and pattern has a classical feel to it. I'd like to make another with the fluting just short of the rim and then turn the rim in to make a little concavity at the rim. 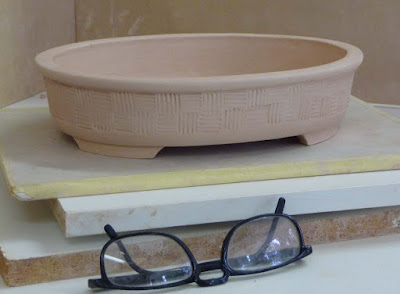 This pot has already dried. Its pattern is basket-weave. The idea is for the glaze to fill most of the texture but leave enough texture and glaze depth differential for a little visual interest. 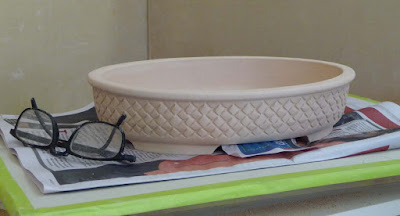 This one is done with a stamp that is just basically a raised X, but on repeat makes an interesting pattern.

Again one I've thought about for a while. Its been done with a simple ball shaped piece of bisque to produce the sort of patterning you get on a piece of beaten metalwork. Much of that detail will go with the glazing but it should produce an interesting irregular surface none the less.
Just filled the kiln with a bisque load. One big oval, 11 smaller ones and a bunch of stamps. So nice to work in three dimensions.

Posted by Stephen Cullum at 14:32 No comments: