Grafting is a much more certain and immediate way to develop a new branch on a tree than waiting for a bud to appear just where you want it.

The most common technique used in bonsai to do this is with a thread graft. Thread grafting works by drilling a hole right through the tree and threading a new young branchlet/shoot through the hole to emerge where you want the new branch. Now you can either take the branchlet from an extended growth on the same tree or another. Coming from another separate tree is often an advantage as you can separately develop the shoot in preparation. I've used thread grafing on Trident Maples and have not been happy with the outcome. In 100% of the cases a trunk swelling occurs both at entry and exit wounds. The swelling seems to continue to grow even after separation. The irritation of the introduced material certanily creates a reaction. A swelling is ok where the branch emerges but directly on the other side as well is certainly not ok as it immediately creates a symmetrical bulge in the trunk with the most unattractive look of a point of reverse taper.

The other way which works effectively is approcah grafting but this isn't so good with alignment where you want a branch to 'emerge' from a trunk at close to right angles.

So in thinking about this problem I hit upon the idea of doing the thread graft but just from the one side. Yes that is a bit lateral in thinking isn't it. But it just means that the new branch material has to go in and out the same hole. Tricky but it can be done if you start early while the material is very fresh. 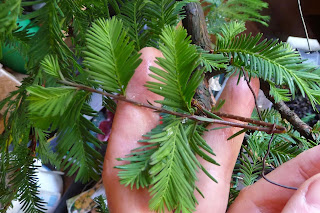 Here is an example of the technique being applied to a Swamp Cypress, and in this picture you can see the scion - a shoot bent through 180 degrees and temporarily wired there. This bend was done just 48 hours earlier and remains quite healthy. 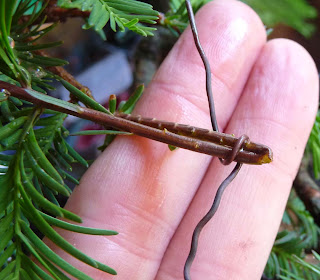 As you can see in close-up there is a small fracture on the outer bend but the sap flow remains sound and it will not impede the process. 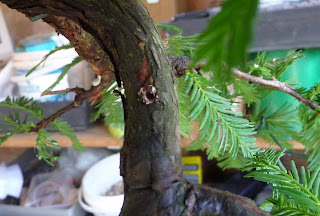 With the shoot prepared and confirmed as ok you can select the location and drill the hole. Here I've drilled in about 5mm. Grafting this way means you get a much more natural alignment and structural security to the young join. 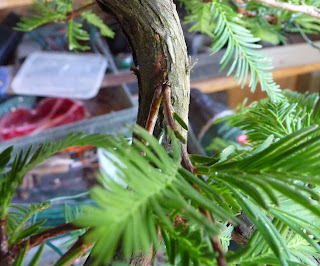 The next step is to simply insert the scion into the hole. 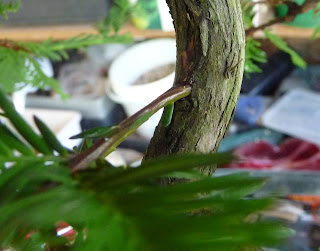 Here's a view more from the side. 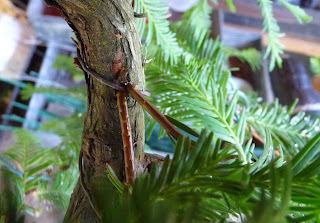 And then secure it with a piece of wire and cut paste to seal it off. 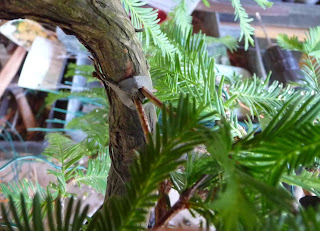 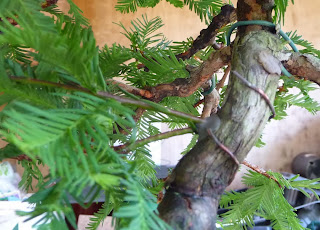 This technique would be useful for grafting on branches that are more advanced. By preparing the branch on a clone of the host and allowing unhindered growth over an extended period the scion size can be well advanced before insertion.

Another more radical thought I had was about the reversability of sap flow in the tissues of the tree. Normally the products of photosynthesis flow down the tree in the layers on the bark side of the cambium layer and the water and nutrients from the roots flow up the tree in the layers on the inner side of the cambium. The question is are the flows reversable? And for the purpose of grafting can the leaf end rather than the trunk end of a live scion be inserted into the trunk for branch grafting??
In our bodies we have to and from the heart flows of blood; in veins and arteries. To keep the flow going back to the heart our veins have non return valves so flow can only go in one direction. Trees don't seem to have valves in their vascular structures so the flows may be reversable, and thus the structures reversable too?

To test the idea on another swampy I have located a shoot which had previously been tip pruned to promote branching. You can see it in the next picture: 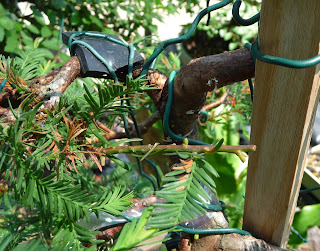 In the trunk behind you will see the hole I have drilled. 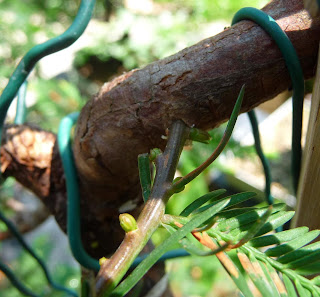 Now what I have done here is to insert the tipped end of the shoot directly into the hole. Not quite a tight fit but tight enough. You can see the new emerging buds at each node. 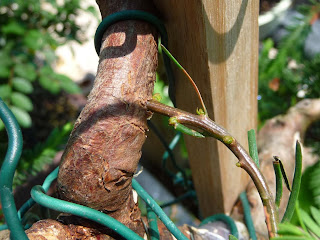 Here's another picture. Now as the tree heals the wound, grows around the inserted shoot and incorporates it, will the emerging shoot be supplied with ex root hydration directly from the trunk via the graft or from the original direction? That will be the test. When the wound has healed and the shoots develop I'll separate the right hand end of the inserted scion and see what happens. If the shoots survive it shows the flow is reversable and I have a new far more convenient grafting technique!!! Watch this space for the results.

Happy Potter
I've grown bonsai for 25 years and in 2010 made my first pot. Shaping trees and shaping clay, who would need to do anything else. Welcome to my journey. http://bonsaipotterycoy.blogspot.com.au email at: happypotter.au@gmail.com